We are one of 28 elementary schools in the Diocese of Covington, Catholic in outlook and in practice.  Presently, approximately 50% of our students are from other faith traditions.  Prince of Peace is accredited through the Nonpublic Schools Commission of Kentucky.

Prince of Peace School (formerly St. John School which began in 1854) was established as a combined urban school in 1986 to provide a quality Catholic education for four of our parishes in urban Covington:  Mother of God, St. John, St. Ann, and SS Boniface and James.  The Sisters of Notre Dame, as well as many other dedicated laity, have taught at the school since 1875.  The purpose of our school is to keep quality Catholic education in this economically and spiritually challenged area.  We do this in a loving and richly diverse atmosphere, where the gospel of Jesus Christ is central in our program.

In 1999, a team consisting of  Lawrence Bowman, Ph.D., then superintendent of Catholic Education in the Diocese of Covington; Sister Mary Sharron Goller SND, then principal of Prince of Peace; and a group of dedicated parents realized the dream of providing an exciting alternate education program for students in this area, and a primary Montessori room for students in grades 1 – 3, was added to the traditional Prince of Peace School.  In 2000, an MII classroom was added for ages 9 – 12 in grades 4, 5, and 6.  In 2005, a junior high Montessori room was added.  In 2011, a Montessori pre-primary class (ages 3 – 6) was added.

By 2010, the traditional program had phased out and there are now two pre-primary rooms, two MI primary rooms (ages 6-9), two MII elementary (ages 9 -12) rooms, and one MIII junior high room.

In addition to these rooms, we have office space, a library, a technology center, a counselor’s office, an academic intervention room,  an art/Spanish room, and two small group rooms.  We have a large auditorium which also serves as a gym and a large cafeteria serving breakfast and lunch to students.  Prince of Peace is located on St. John the Evangelist Parish grounds. 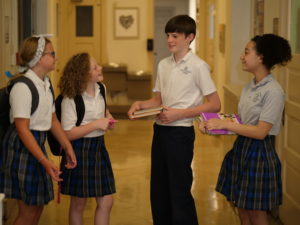